Where does one begin talking about one of the most incredible experiences you’ve ever had? Maybe with my trepidation to take on such a canyon (more about that in a sec), or better yet I could attempt to illustrate how unprepared I was for the beauty and absolute adventure I was about to embark on.

Heaps Canyon is the quintessential canyoneering experience, all others in Zion (save Imlay only) merely hint at the beauty, danger, and amazing journey that awaits those who take it on. To put things in perspective, the first recorded descent of Heaps was only in 1982 by Norman Harding and Royce D. Trapier, after substantial preparation by Dennis Turville and Mike Bogart in 1981. Which is something that I couldn’t keep out of my mind as we traversed this stunning canyon, this fact that so few people have ever laid eyes on it, a few thousand people at most have ever wandered through it.

Anytime someone talks about Heaps they’re required to give the disclaimer, that Heaps is no hike, it’s one of the hardest most challenging canyons in Zion. Not only will you rappel down upwards of 15 – 20 descents, you’ll have to swim in freezing cold water, and have pot-holes that depending on the time of year are difficult to get out of. So don’t even think about doing Heaps unless you’re skilled enough to take it on. For more information on what’s required to actually do Heaps see this great canyoneering website for everything you need.

Okay with the disclaimer out of the way allow me to tell you about my experience doing one of the best things I’ve ever done in my life. It began bright and early at 4 am when we hit the West Rim trail, which is the trail that leads to Phantom Valley and Heaps Canyon. As we walked along I didn’t know entirely what to expect and in truth I was more than a little nervous about it. I had heard of Heaps, and I’ve read about Heaps, and from what I knew it could be a deadly canyon. But I had made a commitment to myself a long time ago that I wasn’t going to let fear stop me from experiencing some of the grandest things this life has to offer, and in the case of Heaps I couldn’t have been more right.

We hiked for approximately 6 miles before beginning our first descent into Phantom Valley. Phantom Valley in and of itself was a view and an image of Zion that few see, and the contrast from it, to the usual Great White Throne and Patriarchs was immense. Each of the three towering sandstone cliffs that are the Court of Patriarchs are named after biblical figures: Abraham, Isaac, and Jacob.  I felt as if I was in an entirely different park, one I’d never set foot in. 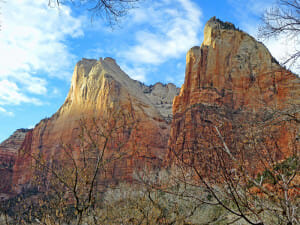 At the bottom of Phantom Valley we had lunch and then suited up. To do Heaps, you’ve got to go full wetsuit, even in the heart of summer the water is extremely cold. So after getting our wetsuits on we began the descent. Luckily we had timed it great and the water levels were such that the pot-holes we encountered didn’t cause us too much trouble. But I could see how if the water level was low, it would be a much greater challenge to traverse this canyon.

Canyoneering in Zions Heap Canyon Was Like Being a Kid Again

I felt completely like a little kid again. We would cliff jump wherever we could, scramble up debris piles, slide down rock waterslides, and then rappel the rest. It was truly like a big immense rock and canyon playground of jumping, climbing, sliding and swimming; with the setting being one of the most interesting and beautiful canyons you can imagine. At times it was open and inviting, other times it was so narrow that you needed a flashlight to see in front of you. The canyon itself was deceptive as well, we would be hiking in a relative straight line and then come to what appeared to be a dead end, only to have the canyon continue at a 90 degree angle.

The swims that Heaps had are the longest I’ve ever seen, and in truth were some of my favorite parts. The Second Narrows as they call it was long and beautiful. It was so relaxing to be swimming along in the water looking up at the water carved canyon walls. Luckily I had some great canyoneering gear provided for me by Adventure Plus for which I was grateful for, so if you’re looking for gear check them out.

Just before we reached the final descent into Emerald Pools there’s a place with a  small rock slide that dumps you over a 30 – 40 ft cliff. When I first saw it my friend was like “let’s do it” and I immediately thought “oh hell no!”. In fact, I thought he was kidding…he was not. He scouted out the water below and then launched himself down the slide and over the cliff. After he made it safely down it took me a minute or two, and a few queries calling into question my manhood before I decided to go, my only regret is we didn’t get it on film. It was the perfect ending to an incredibly fun time to slide down a 10 ft rock waterslide over a 30 ft cliff.

The final rappel into Emerald Pools is something else. You begin with a 60 ft descent to a long tree on the cliff-side, here you tie in and drop another 165 ft to what they call the perch, which is a rock platform just big enough for 4 people to stand on. And here is where you tie in and drop the final 300 ft into Emerald Pools. The view the entire time was immense. The final rappel has 280 ft of free-hang to it that is both dangerous and exhilarating at the same time. Looking down as you’re descending that rope offers views of Zion that are just impossible to get any other way.

All in all we got out of the canyon at about 9 pm. It was a long day, but an amazing day as well.

Here is a video we found that add an interesting perspective of people looking up from the ground and combines it with the views of those rappelling.

Looking back on it, the fun, the challenge, the beauty, it truly is one of the best things I’ve ever experienced. Zion National Park is truly a place like no other, and you’ll see that in Heaps Canyon like you won’t see it anywhere else.